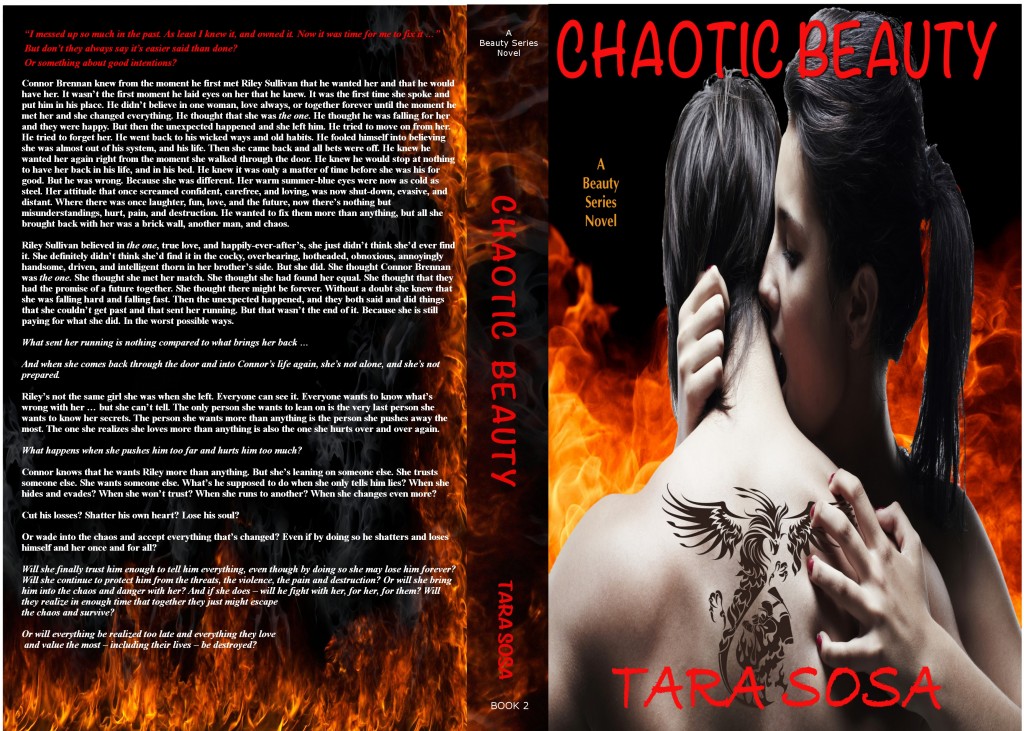 Sooooo here it is! The cover of Book Two of the Beauty Series – Chaotic Beauty!  I am in love with this cover! For those who read Unexpected Beauty you know that Connor is a firefighter … Which explains all the chaotic swirls of fire and smoke … And it also explains the tattoo on Connor’s back. There is a specific scene that I wrote explaining the tattoo that you can see on the cover … I actually wrote that particular scene into the book after the book was done because it took me a really long time to find the perfect tattoo. I knew that I wanted something that encompassed Connor – who he is professionally (a firefighter) and all the things that make him who he is on a personal level (his loyalty, bravery, strength, courage, dedication, determination, fearlessness, passion, and a few other really awesome things as well). When I came across the tattoo I knew it was “the one.” The flaming dragon hell-bent on destruction, and at its base a firefighter in full gear taking on anything thrown its way … It’s definitely an apt description of both Connor professionally & personally … And it’s very fitting because Connor has to take on a lot in this book!

Also we have the woman (Riley) with her hair a certain way and her physical features (what you can see anyway) are spot on for my vision of her as is Connor. I know you can’t see Connor’s face – and that was my intention. I wanted you to see his back and his hair, and for you to imagine his stormy blue eyes, his face, the rest of him. When you read the book you should know exactly why I went with this cover and why I had my cover artist design and add to it in such a way. I’m thinking if you don’t like it now, you will at least appreciate it after you read the book … trust me!

Enough about that though, because if I point out everything I’ll be giving things in the book away and I really want you to discover why the cover is perfect for both Riley & Connor on your own.

Anyway … Sooooo I am thinking … since the Pre-Order link will be out soon, and because you took the time to visit my page … I am going to give you all a little something early! How about the “blurb” to Chaotic Beauty?? That way you can  know a little bit about what you are in for????  I will be posting it underneath this post and also in my books tab … So I hope you enjoy!

I think that’s it from me right now. This upcoming week my book will be available for preorder on Amazon, and we will be working on it for BNN as well … My book will be going to the printers for all of you that want it in paperback so I should be getting proofs of that soon too, so that way I can make that available… AND I am also working on some teasers for all of you that I will be posting on here like I did on the side of the homepage with Unexpected Beauty, and also I’ll be posting them on my Authors Facebook page and also on Twitter … So get ready for that!

I have quite a few passages and one-liners that I want to use, but I may need to narrow them down a bit because some of them are a little “spoilery” and we don’t want that & some are just a bit “interesting” in the best possible and blush-worthy way … And I’m not sure about those either!!! But definitely this upcoming week I’ll be posting some on all of my sites. So check it out!
Okay, okay … I’ll stop talking so you can go read the description of Book 2 …
Like I said I hope it gets you ready for book 2!
Until next time!

But don’t they always say it’s easier said than done?

Or something about good intentions?

Connor Brennan knew from the moment he first met Riley Sullivan that he wanted her and that he would have her. It wasn’t the first moment he laid eyes on her that he knew. It was the first time she spoke and put him in his place. He didn’t believe in one woman, love always, or together forever until the moment he met her and she changed everything. He thought that she was the one. He thought he was falling for her and they were happy. But then the unexpected happened and she left him. He tried to move on from her. He tried to forget her. He went back to his wicked ways and old habits. He fooled himself into believing she was almost out of his system, and his life. Then she came back and all bets were off. He knew he wanted her again right from the moment she walked through the door. He knew he would stop at nothing to have her back in his life, and in his bed. He knew it was only a matter of time before she was his for good. But he was wrong. Because she was different. Her warm summer-blue eyes were now as cold as steel. Her attitude that once screamed confident, carefree, and loving, was now shut-down, evasive, and distant. Where there was once laughter, fun, love, and the future, now there’s nothing but misunderstandings, hurt, pain, and destruction. He wanted to fix them more than anything, but all she brought back with her was a brick wall, another man, and chaos.

Riley Sullivan believed in the one, true love, and happily-ever-after’s, she just didn’t think she’d ever find it. She definitely didn’t think she’d find it in the cocky, overbearing, hotheaded, obnoxious, annoyingly handsome, driven, and intelligent thorn in her brother’s side. But she did. She thought Connor Brennan was the one. She thought she met her match. She thought she had found her equal. She thought that they had the promise of a future together. She thought there might be forever. Without a doubt she knew that she was falling hard and falling fast. Then the unexpected happened, and they both said and did things that she couldn’t get past and that sent her running. But that wasn’t the end of it. Because she is still paying for what she did. In the worst possible ways.

And when she comes back through the door and into Connor’s life again, she’s not alone, and she’s not prepared.

What happens when she pushes him too far and hurts him too much?

Cut his losses? Shatter his own heart? Lose his soul?

Or wade into the chaos and accept everything that’s changed? Even if by doing so he shatters and loses himself and her once and for all?

Will she finally trust him enough to tell him everything, even though by doing so she may lose him forever? Will she continue to protect him from the threats, the violence, the pain and destruction? Or will she bring him into the chaos and danger with her? And if she does – will he fight with her, for her, for them? Will they realize in enough time that together they just might escape the chaos and survive?

Or will everything be realized too late and everything they love and value the most – including their lives – be destroyed?